I already posted my original lineup for April 19th, but a few of my followers wanted a lineup surrounding more value picks (Logan Verrett) when it came down to potential arms. With that said, I will call this my “value arms” lineup for today. If you want to see the original picks, please click the following link: http://dynastydigest.sportsblog.com/posts/16204278/daily-fantasy-mlb-dfs-picks-for-draft-kings-4-19-16.html

P- Logan Verrett (vs. Philadelphia Phillies): $5,600. This could be a great bargain buy. Verrett is dirt cheap and he is facing a dirt lineup. By dirt, I mean terrible. The Phillies have the 23rd best offense in Major League Baseball. They are striking out about 29% of the time, so this bodes well for some easy points for Verrett, who has 7 strikeouts in 7 innings this year. In his only start this season, Verrett dominated the Miami Marlins over 6 innings giving up only 3 hits, walking 2, and striking out 6. At this price point, Verrett opens up your entire lineup for some elite bats.

P- Ervin Santana (vs. Milwaukee Brewers): $8,000. Santana doesn’t have much history against the Brewers, but can they really be that difficult to get out? They are currently the 26th best offense in baseball and Santana is a crafty veteran. I’m strictly playing a match-up here and hoping Santana can take care of a less than mediocre offense.

If you want to see the rest of the picks, click the link below:

P- Marcus Stroman (vs. Baltimore Orioles): $7,700. I wouldn’t typically suggest starting a pitcher against the Orioles offense, but I think Stroman can handle them. The pitching match-ups are brutal on Tuesday, so Stroman could be a steal at such a low price point. I’m taking a huge risk here, but I’m hoping the lower price point on Stroman will allow me to afford some elite bats to make up for the difference.

P- Ervin Santana (vs. Milwaukee Brewers): $8,000. Santana doesn’t have much history against the Brewers, but can they really be that difficult to get out? They are currently the 26th best offense in baseball and Santana is a crafty veteran. I’m strictly playing a match-up here and hoping Santana can take care of a less than mediocre offense.

In Foul Territory: The Real Cost of MLB Extended Netting

During the last week of January 2016, the Double AA MiLB Fort Wayne TinCaps announced they would be extending netting to the end of each dugout for the 2016 season. They anticipated a cost of this extended netting to be $20,000. The rationale was to protect fans from foul balls and loose bats.

However, the debate over extra netting in 2015 was virtually non-existent. In truth, netting is not a cost-efficient method for protecting fans and maintaining the player/fan interaction which is central to baseball. Netting, is both the short- and long-term, is more expensive to install and to maintain, a point MLB Commissioner Manfred appeared to ignore before making his announcement during the 2015 Winter Meetings in which he “recommended” extended netting. The issues opponents to extended netting addressed to MLB were ignored.

Indeed, Commissioner Manfred ignored several alternatives to extended netting, particularly banning cell phone use in certain sections and moving families with small children into designated sections in the outfield and upper decks, areas with fewer foul balls and no errant bats. He also ignored the idea of tempered glass. This was an error that could cost teams and the league tens of thousands of dollars over the course of each season.

END_OF_DOCUMENT_TOKEN_TO_BE_REPLACED

The Lawerence MA franchise, that played most of its games in nearby Manchester NH, ended with a 48-31 record in a tie with Brockton, so a three game championship series was needed which was won by Lawerence. 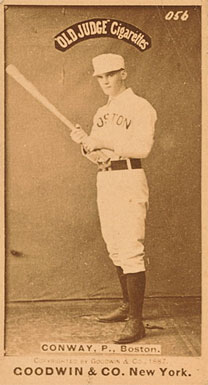 Several Major League players played in the Eastern New England League. Dick Conway, officially named Richard Butler Conway, was a pitcher who helped the Lawerence team clinch the pennant. Conway won 23 games and fanned 274 hitters. He debuted in the Majors on July 22nd of the next year with the Baltimore Orioles. He pitched his final MLB game on October 8, 1888, with the Boston Beaneaters. While pitching with the Orioles he formed a battery with his brother Bill.

Con Murphy, who pitched for the Haverhill team, had the best winning percentage of that year with a 13-2 record (.867). Murphy had a cup of tea with the Philadelphia Quakers, a short lived National League team, for which he started three games and lost all of them with a total ERA of 6.58. In 1890 Murphy would pitch twenty games for a non specified Players League team. In the twenty starts he posted a 4-10 record with 4.79 ERA.

A player with a rather short baseball career was Walter Farr Prince. He played ball for six sesaon of which a total of 50 games in the Majors. After the 1884 season he only played in the minors. In 1885 he was tied for most RBI in the Eastern New England League with 61.

Another player that played for the Boston Beaneaters was Tommy McCarthy. In 1885 he struggled at the plate with a average of .182. After several warnings from the Beaneaters’ manager, McCarthy wasn’t able to improve his batting skills and he was released. Forced to accept a job in the minor leagues, he ended up with the Haverhill team in September. At once the team climbed in the standings and finished third, trailing Lawerence and Brockton by four games after the final day of the regular season. Despite being released by the Beaneaters, McCarthy ended up in the Hall of Fame. McCarthy and his team mate Hugh Duffy formed the famed duo “The heavenly Twins” as described in the book by Richard Johnson.

Hi, my name is Josh Robbins.  I would like to share my Daily Fantasy Sports (DFS) strategy with you throughout the MLB season during weekdays.  Fanduel is my preferred game of skill.

Strong Player Starts (and Not) From Around The League: National League East

Now that we’re a couple weeks in to the season, besides the amazing start by rookie Trevor Story, let’s take a look at some other players from the NL East that are hot starts and some that aren’t to this point.

Brandon Guyer went 4 for 4 with 2 runs scored and an RBI to help Tampa Bay beat the White Sox, 3-2.

Aaron Sanchez held Boston to 2 hits and 1 run while striking out 7 in 7 innings and earning the 5-3 decision for Toronto.

Nolan Arenado provided all of the offense with a pair of solo homers as Colorado shut out the Cubs, 2-0.

Tyler Chatwood threw 7 shutout innings, allowing 2 hits and 1 walks while striking out 7 Cubs and getting the 2-0 win for the Rockies.

Writer Stacey Gotsulias joined the podcast to talk about the 2016 Yankees, expectations and all the ways I mispronounced her name.

It is an “easy for you to say” episode of The Sully Baseball Daily Podcast.