BBA Live is the flagship Podcast of the Baseball Bloggers Alliance since 2015.

BBA Live! is entering its second season. Listen in as AC Wayne is again joined by Ricky Keeler of Yanks Go Yard and District On Deck (Nats). Tonight, we’ll showcase the opening week that was – and what to expect in week 2 of the MLB.   Rich Rivera is also a slated guest. 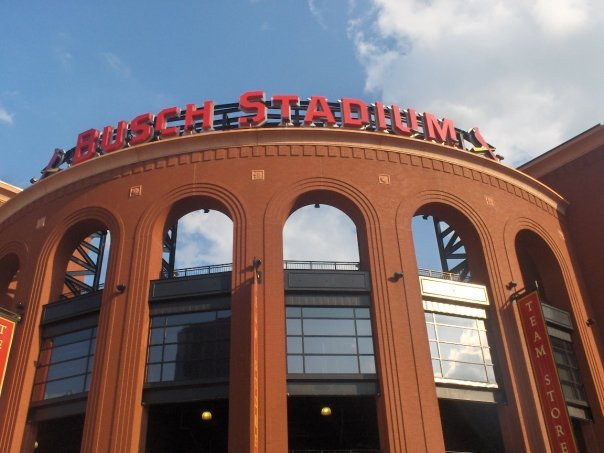 Best home win for all 30 clubs in winning 10 – 1 over the Milwaukee Brewers Monday Apr 11, 2016  9 runs difference was the best run differential for the home clubs.

The Cardinals featured the best win for the home side, working over the Brewers for a 10 – 1 win yesterday.

Of note, it was the last home park openers for David Ortiz and the great Vin Scully announced the lineup for his last Dodger Stadium opener, in what was the 30th home opener on the itinerary.

This Week in Milwaukee Brewers History – The Indians/Angels Snow Series

This week in 2007 the 3-game series between the Cleveland Indians and Los Angeles Angels of Anaheim, scheduled to be played at Jacobs Field April 10-12, was moved to Miller Park.  The Indians had already started the season on the road against the Chicago White Sox, winning 2 of 3 games.  When they came home to Cleveland, Mother Nature had plans that would interrupt their festivities and the next several games.

The original Indians home opener was Friday, April 6, against the Seattle Mariners.  The game was one out from becoming official before being cancelled by a snow storm.  In fact, the Indians were leading 4-0 and had a no-hitter going to boot.  The game was delayed at first before eventually being cancelled.  It was scheduled to be made up the next day as part of a doubleheader, but snow and chilly temperatures again forced the games to be cancelled.  Sunday and Monday also turned into doubleheaders as an attempt to get in the missed games.  The idea was to no avail – the entire weekend and Monday passed without the Indians and Mariners taking the field to play.

By Monday the upcoming three game series with the Los Angeles Angels of Anaheim looked like it could be lost to poor weather conditions as well.

P- Phil Hughes (vs. Chicago White Sox) $7,300. Today I went with two mid-tier pitchers rather than paying an elite price for an elite arm. Carrasco vs. Tampa Bay was the only arm that really appealed to me above Hughes and Lackey, but I rather take a price cut with Hughes and spend my money on my offense. In 173 career at bats against Hughes, the White Sox offense is hitting .272 against him with 4 home runs, 11 RBI’s, and 36 strikeouts. I think these numbers point in Hughes’ favor, so I’ll stick with him today.

P- John Lackey (vs. Cincinnati Reds) $8,300. Lackey has dominated the Reds lineup throughout his career. In 101 total at bats, the Reds lineup is only hitting .228 against Lackey with 2 home runs, and 18 strikeouts. Lackey is pitching at home for the first time, which should bring about lots of energy and excitement. On another note, his run support should be plenty to get the win over the Reds, which will help contribute to his point total.

To see the rest of the picks for 4/13, click the link below:

Doubront’s injury may be what’s best for A’s 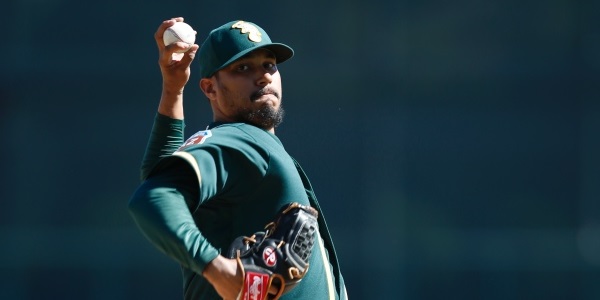 Doubront to have Tommy John surgery on Tuesday

You’ve already heard this news I’m sure and we all (at least I did) completely saw it coming. Felix Doubront, who was named the Oakland A’s fifth starter in late March, couldn’t even make it through his first exhibition game against the Giants.

It was an exhibition game but to hold that San Francisco Giants’ potent offense, keep them from scoring and secure an Athletics’ victory over a despised rival is a pretty big deal.

This post is supposed to be around Doubront. If you’d like to know more about Surkamp just CLICK HERE to read my column on Today’s Knuckleball.

It was pretty obvious, the outcome off Felix Doubront’s injury. He left the game with forearm soreness ( Tommy John surgery sign number one). He had an MRI (sign number two). Got the doctor’s opinion and decided to seek a second opinion (sign number three and the nail in the coffin of the diagnosis of a torn ulnar collateral ligament and the inevitable, Tommy John surgery).

Click here to read the rest of this story on BBST

Max Scherzer was filthy in the 1st half of 2015 – with a 2.11 ERA heading up to the ALL – Star Break, and Stephen Strasburg ended the 2nd half of the year with a 1.90 in his Post ALL – Star games. If these 2 day aces can be in top form for the whole year, and then carry through to the playoffs, it would go a long with their chances to win a World Series. Since Jordan Zimmermann and Doug Fister left, the rotation is not as deep as it once was, yet these guys could make for an unforgettable 1 -2 punch in the postseason, and combined with Bryce Harper, potentially win the Fall Classic this year.

With Zack Greinke flying the coop in Los Angeles over the winter, all of a sudden, this dynamic pair of Nationals chuckers should be the best back to back starting tandem in the Majors right now.

It is a walk year for Stephen Strasburg.  He has shown flashes of brilliance, but has yet to put it together for the whole year.  You could say his career has kind of been like Schilling’s prior to his arrival in Arizona.

I think both guys could near 20 wins each. have mid 2 ERA’s – and both compete against the NL’s elite for the NL Cy Young Award.

If they have great seasons, it should equal a playoff berth – and if not the NL East Division.  Strasburg’s best two years were in 2012 and 2014, so maybe he is just a better even year pitcher himself.

Scherzer is 53 – 20 with a near 1.00 WHIP and ERA of 3 since the start of the 2013 season.  No doubt these 2 guys will pull up awesome numbers in playing the Marlins, Phillies and Braves for almost 40% of their total games.  Add in the Brewers, Reds, Padres, Rockies to the fold, and that becomes half of the year.

Should Washington make the playoffs, that is exactly why they doled out $210 over 7 years for Scherzer in the first place.  The former Tigers pitcher was pretty damn good in the 1st RD of the postseason for Detroit, going 3 – 1, with an ERA of 2.79 and WHIP of 1.034 in 29 Innings worth of work in the LDS rounds.  I think he could take the next step beyond that.

Last year Scherzer threw 2 no-hitters and nearly tossed 2 more.  He has shown he can last longer than ever before.  He was a workhorse with his 228.2 IP. It was a career high, just like his 276 Strikeouts in that timeframe and his incredible WHIP of 0.918 were.

It is time to for Strasburg to leave it all on the table.  Much like his 34 Game Starts in 2014, where he logged 215 Innings and a NL Leading 242 Strikeouts, the former #1 overall pick could really make a fortune in Free Agency with a banner year. At Age 27 until late July when he turns 28, he is still in his prime years coming for the next few campaigns. END_OF_DOCUMENT_TOKEN_TO_BE_REPLACED

About Colby Lewis, Josh Reddick and The Catchers Interference

On Friday, Off The Bench published its first foray into the new Statcast data.  In that piece, which is made possible by baseball savant, I made note that Colby Lewis was the only player to induce (throw) multiple catcher interferences last year. I went on to publish the first ever heat map in Off The Bench history, but kept coming back to Colby Lewis and wondering what the hell happened on those two plays.  Of the 702,307 pitches thrown last year, only 31 (0.004%) ended with a catcher interference call. Why was Colby Lewis unfortunate enough to have it happen to him twice? And why were they on different pitches in the same quadrant of the strikezone?

I got so worked up that I used an exclamation point.  I have kept coming back to those two red dots.  It feels like a song is stuck in my head, but it’s really just some bizarre corner of my brain has developed a fascination with Colby Lewis’ 2015 catchers interferences.  I’m not sure what that says about me, or about you for reading about it. But to the interwebs I went in search of something to appease my admittedly odd appetite for interference information, armed with some data from baseball savant and Google.

*I also knew all sorts of information such as spin rate, direction, home plate umpire, and the count, but let’s not consider the above a full list of things that I knew.

Well, here’s something interesting right out of the shoot:

**To continue reading, see the full article here: About Colby Lewis, Josh Reddick and The Catchers Interference.  You should also check out our full site at offthebenchbaseball.com and our twitter @BlogOffTheBench

Posted in MLB Reports, Off The Bench 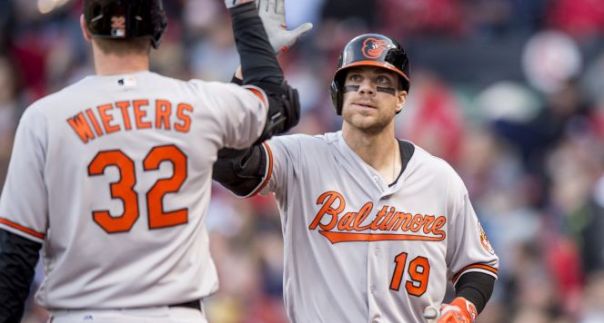 Chris Davis drove in five between his two hits, including a three run homer with 2 outs in the 9th to lead the Orioles to a 9-7 win in Boston.

Jeremy Hazelbakerwent 4 for 4 with a double and a triple, scoring a run and driving in another to help the Cardinals top the Brewers, 10-1.

Collin McHugh threw 7 shutout innings, allowing 8 hits and 1 walk to lead the Astros past the Royals, 8-2.

Michael Wacha struck out seven Brewers in six shutout innings to lead the Cardinals to a 10-1 final.

The A’s are looking at new sites for a stadium and one could be kind of interesting.

But the simplest solution still is staring them in the face.