Like most professional sports, Major League Baseball is a copycat league.

When the San Francisco Giants and Kansas City Royals displayed how crucial a dominant bullpen can be en route to winning championships, other teams tried to duplicate their strategy in hopes of finding similar success.

Now, after seeing what it took for the Chicago Cubs to end their excruciating 108-year title drought, even their most bitter rivals are taking notes for the future.

Although they haven’t yet won a World Series, the Cleveland Indians and New York Mets have rebuilt their respective rosters in such a way that many opponents are likely jealous of. There aren’t many organizations around baseball with the type of top-flight and mostly homegrown starting pitching these two have.

That’s not where the similarities end, either.

In fact, Cleveland recently signing Edwin Encarnacion to a three-year deal on the eve of Christmas further strengthens the similarities between these two teams, and it’s much more than just reaching the Fall Classic one year apart.

According to a recent report, the Toronto Blue Jays will make efforts to retain the services of Edwin Encarnacion and Jose Bautista.

If the Toronto Blue Jays were not comfortable with extending Edwin Encarnacion before the season started, perhaps they would be now that he’s put up some impressive MVP type numbers. Or, perhaps his clutch postseason hitting has tipped the scales in his favor. Whichever it is, the club certainly has to be thinking long and hard about ponying up the dough for Edwin.

Jon Heyman says that the club plans on making qualifying offers to both Edwin and Jose Bautista (more on him in a bit), assuming the new collective bargaining agreement allows for one. That is not much of a surprise. The team would certainly offer up the one year deal in the hopes of retaining the players or them rejecting the nearly $17M in favor of free agency, which would net the club two picks in the next draft. So, the QO is not such a difficult decision.

Between the regular season and the playoffs, there’s still about two months of baseball left to enjoy, but winter is approaching faster than we realize. It stinks to think about life without baseball (even for a relatively short period of time), but that also means the Hot Stove is coming to keep us occupied.

As we’ve been talking about for quite a while, this winter’s free agent class is less inspiring than others in recent memory. That doesn’t mean there still won’t be a bunch of players signing life-changing contracts along the way, though. Some impending free agents have hurt their stock this year, but the following six hitters have elevated theirs as much as possible over the past five months, especially with less competition than normal from others who will soon need a new home for 2017.

BLUE JAYS’ DH, EDWIN ENCARNACION, IS SURPASSING HIS PRE-SEASON PREDICTIONS AND COULD BE SETTING HIMSELF UP NICELY FOR HIS IMPENDING FREE AGENCY.

We didn’t really think we’d heard the end of the Edwin Encarnacion– Toronto Blue Jays contract situation, did we? Throughout the winter and Spring Training we were constantly reminded that there was no agreement in place for beyond the 2016 season. Throughout that period and into the season, we would hear constant reminders that this could be the last season in Toronto for The Walker of Parrots. Now that the season is well under way, there are rumblings of the Trade Deadline approaching and what that could mean for the 33 yr old.

The same can be said for Jose Bautista, perhaps more so. But unlike real life, this piece will bring Edwin out of the shadow of his older counterpart and put the focus squarely on him. After all, the argument exists that Encanrnacion has been the more productive of the two, which is kind of the point. Edwin is outperforming his pre-season projections and could be setting himself up for a nice payday in the fall.

P- Zack Greinke (vs. San Diego Padres): The Padres’ offense has been one of the worst in Major League Baseball all year long. Not only have they struggled this year, but they have struggled against Greinke every time he stepped on the mound. In 178 career at bats against Greinke, the Padres’ batters are batting a cool .191, with one home run, eight RBIs, 44 strikeouts, and a .237 OBP.

Greinke has struggled at some points in 2016, but he has been very good in his last two games, which were against the New York Yankees and St. Louis Cardinals. Greinke has thrown one game against the Padres this year, in which he threw 7.1 innings, giving up six hits, two earned runs, one walk, and five strikeouts.

The Minnesota Twins have by far the worst offensive stats against left-handed pitchers this season out of all Major League Baseball teams. In 263 at bats against lefties, they are hitting a whopping .209 (last in MLB), 21 runs (last in MLB, and a .285 OBP. Well folks, we are in luck because Wade Miley does in fact throw with his left arm.

Is The Toronto Blue Jays’ Slow Start a Preview of What Their Future Could Look Like?

When it comes to the game of baseball, sure things come few and far between. However, there was one thing just about everyone was sure about heading into 2016: the Toronto Blue Jays would have an incredible offense.

With Jose Bautista, Edwin Encarnacion, Josh Donaldson and Russell Martin back in the fold, along with a full season of Troy Tulowitzki, it’d be tough for anyone to stop them. Right?

Surprisingly enough, the greatest disappointment of all is how badly the lineup has performed through the first quarter of 2016. Using the same stats as the ones above, Toronto’s offense is basically average, which won’t help them return to October.

The offense not performing up to expectation has happened largely due to the lack of production from four very important pieces: Tulowitzki, Martin, Bautista and Encarnacion.

Welcome to the first full weekend of the 2016 MLB season.

Its A Walk Year For Encarnacion + Bautista: Does This Mean Huge Years?

Jose Bautista and Edwin Encarnacion are both free agents after this season. Will this fact translate into big years for the two?

Every Toronto Blue Jays fan knows that 2016 marks the end of both Jose Bautista an Edwin Encarnacion’s contracts. Both players set the start of the new season as their deadline to sign an extension. Neither one has signed a new contract with the Blue Jays.

If both Jose and Edwin stick to their words, it is likely that neither one will be a Toronto Blue Jay come 2017. Recognizing this fact, many sportswriters have been predicting that both sluggers will have monster seasons, if for no other fact than this is their “walk year” and a big season will translate into a big “payday”.

However, do players tend to have big years in the last year of their contract? In order to try and answer this question, I needed some comparisons to look at. 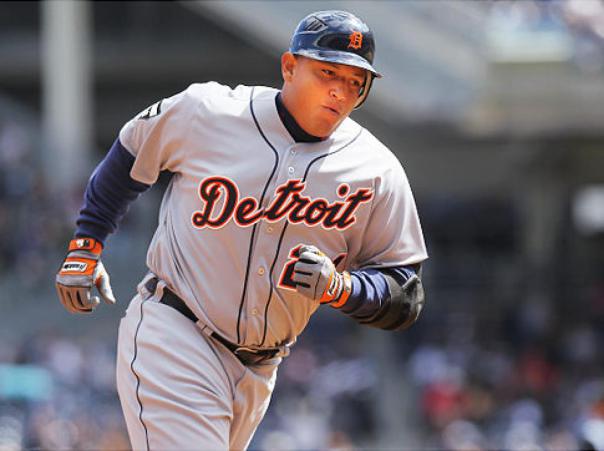 Miguel Cabrera won this award back in 2012 and 2013 – and is fully healthy this upcoming campaign, on a club that is much improved and will be in contention for a playoff spot all year. His +700 odd is a great value bet.  We are picking the man to win the American League MVP this year.  Mike Trout will likely finish 2nd again, and that is based solely on his team probably not vying for a playoff position this year in my view.  Trout should still win the AP Player of the Year and Sporting News player of the year as well..

There is no doubt in the world that Mike Trout is the best overall player in the American League, and he is still the best player in the Majors (at least for now – until Bryce Harper has a better 2016 than him again in 2015), but his team is going to make it tough for him to win the MVP over the next few years.

Having said this, the +175 odd is still about where it should be.  If the Angels are in the race down the stretch, and he has better number than the field, Trout will take his 2nd trophy this season.

Honestly the odd that surprised me the most was the Manny Machado odd at +500.  I am not questioning his talent, or the fact he should be a top 5 player for years in the AL;  I am questioning the website for having the O’s ranked 14th out of 15 AL Clubs! END_OF_DOCUMENT_TOKEN_TO_BE_REPLACED