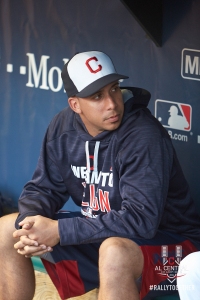 the Cleveland Indians might be playing now in the playoffs, but Michael Brantley is a spectator along with the rest of us. so before i can write my Indians season wrap up blog, i wrote a series of wrap ups about Michael’s year. i split his final 2016 #s into three separate blog posts so that i didn’t overwhelm everyone with several different numbers and stats all in one blog. despite him only playing in 11 games this year, there was still a decent amount of information for me to report, so feel free to browse through what you like.

now it’s time to start posting my series of Michael Brantley wrap up blogs. the primary focus of this first blog is Michael’s game-by-game numbers and notes, but let me tell ya, there are more notes than numbers.

this blog is the second in what i’m referring to as my Brantley wrap up series. even though he only played in 11 games, he did bat in three spots in the order; therefore, i have stuff to break down.

the third installment of my Brantley wrap up blog series contains Michael’s 2016 situational #s and other statistics. this includes everything from his batting average against RHP and LHP, at home and away, with RISP, with runners on base, with bases loaded, and with bases empty.