Major League Baseball ended the week of August 8-14, 2016 with over nearly 130 Foul Ball Facials (#FoulBallFacials) in nearly 130 games. These are only those fans hit in the head area at MLB games as self-reported on Twitter. That equates to one fan per day of play. It seems like a lot, and it is, but over 60% indicate they weren’t paying attention. 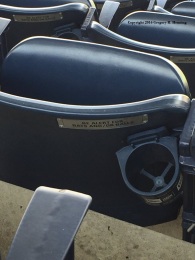 But that’s not the only thing going on with foul balls this week. Here’s the rundown of the best and worst foul ball and fan-related actions from the past week:

I admire people who ignore their own personal safety to make a play. But running and leaning over a wall and falling horizontally into the seats is one thing. Jonathan Villar had a different take on this: He went vertical, horizontal and then vertical again, falling into a camera well.

I run FoulBallz.com. I research and write about foul ball information and fan safety issues mainly. There's the occasional piece about the Tigers. Active on Twitter as @FoulBallz.
View all posts by FoulBallzEd »