At just 22 years young, Corey Seager of the Los Angeles Dodgers has, somewhat quietly, been the best shortstop in the National League in 2016. Sure, Trevor Story of the Rockies is beating Seager in homeruns (17 to 15) and received most of the early season hype. Similarly, Aledmys Diaz of the Cardinals is 35 points ahead of Seager in batting average, .315 to .280. Then there is Brandon Crawford, who may be the best defensive shortstop in the NL now that Andrelton Simmons is in the AL. Looking at the sum of the parts, however, Corey Seager would be my choice to start in this years’ All-Star game even as a rookie on the senior circuit.

Seager was not in the NL lead for shortstops in the June 8th All-Star Game voting update. In fact, the 2015 top prospect was not even in the top five, despite leading the NL in fWAR for shortstops at 2.8. The names ahead of him include the aforementioned Crawford (2.7 WAR) and Story (1.5), as well as Addison Russell (1.1), Asdrubal Cabrera (0.7), and Zack Cozart (1.6). But, while Seager may not get an all-star nod this season, there is reason to believe that he will be in the running for several years to come.

First, I would like to take a look at what Seager has done so far in his short major league career, to determine whether or not his numbers fall in line with his minor league track record. As of June 15th, Seager had accumulated a batting line of .295/.365/.526 throughout his first 92 career, good for an .891 OPS. Taking his counting stats over those same 92 games and stretching them into a full 162-game season, Seager would accumulate an average of 35 doubles, 33 homeruns, 93 RBIs and 104 runs scored to go along with a 16.8% strikeout rate and a very good 9.6% walk rate. Make no mistake, those are great numbers, especially for a shortstop, and it is easy to think that Seager will soon return to earth.

Click the link to continue reading about how Los Angeles Dodgers’ shortstop Corey Seager is crushing a certain type of pitch. Also, check out our full baseball blog and you can follow us on Twitter @OTB_Baseball and follow Alex on Twitter @AVBlogs_MLB16

One of the biggest blunders made by many gamblers is betting against themselves.  We are going to simplify the process, so if you win, you can really win – none of this barely break even nonsense.

Our new Draft Strategy is now here.  Please read after the post.

Now here is what we are going to do for today’s MLB DFS FanDuel style.

We Will Give You – Daily AT least:

5 team stacking options ( We are going to draw most of our players from these 5 squads). 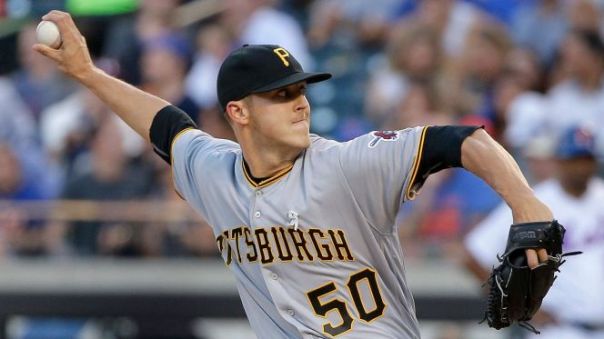 James Taillon took a no hitter into the 7th and finished with 8 innings of 2 hit shutout innings as the Pirates blanked the Mets, 4-0.

Carlos Gonzalez went 4 for 5 including a homer to lead the Rockies in a 13-10 slugfest over the Yankees.

Doug Fister pitched into the 8th, going 7 1/3 innings, allowing 2 runs and earned the 5-2 decision for the Astros over St. Louis.

Josh Donaldson reached base 4 times, homered and drove in 5 to help Toronto blast the Phillies, 11-3.

Jameson Taillon’s First MLB Win Took a While, But the Timing Was Perfect For the Pirates

From the moment he got drafted to the moment he officially earned his first big-league victory, this was not how Pittsburgh Pirates pitcher Jameson Taillon imagined it would all happen. That doesn’t mean it wasn’t worth the wait, though.

Expectations were high within seconds of him learning he was taken with the second overall pick in the 2010 MLB draft — right after Bryce Harper and right before Manny Machado. Those expectations continued growing after just 23 career minor league starts when analysts began mentioning him as one of baseball’s top 20 prospects. He continued proving those analysts right as he rose all the way up to Triple-A as a 21-year-old in 2013.

And then suddenly, everything had to be put on hold. In the blink of an eye, Taillon went from being a stud top prospect on the verge of his big-league debut to being sidelined with injuries for two full seasons.

Then, it happened – the call Taillon was anticipating on getting sometime during 2014 finally came on June 8 in front of the home crowd at PNC Park against the New York Mets. It wasn’t a Stephen Strasburg-like debut, but it wasn’t too shabby. The right-hander delivered a quality start by allowing three runs on six hits, two walks and three strikeouts in six innings of work.

Little did he know how soon and how important his second MLB start would be.

A lot of talk in the baseball world has been centered on the fact that Ichiro is about to surpass Pete Rose for all-time hits as a professional. Heck even my dad brought it up as we were having lunch together yesterday.

The thing that is making this topic so controversial is that Ichiro got quite a few of his hits while playing in Japan. This has got me thinking about whether or not I will consider Ichiro the Hit King or if that title stays with Pete Rose.

Read the rest of Ichiro vs Rose via 9 Inning Know It All.

The week in review: The Milwaukee Brewers went 4-3 over their last seven games going back to last Tuesday. They swept a short two game series with Oakland and then split a four games series at home against the New York Mets.  Last night their bullpen got roughed up in an 11-5 loss in San Francisco.  Going into Tuesday’s action Milwaukee was 30-34 in the NL Central, good for fourth place and 2.5 games behind Pittsburgh.