National League Rookie Of The Year Odds In MLB 2016 Action

Corey Seager is not even in the lineup to open the season but he is the overwhelming favorite to the win the NL Rookie Of The Year Award in 2016 MLB Action.

Update:  I was wrong, Seager is was in the lineup for the opener.  Having said this, there is no value to bet on him at the odd given, even though he is the overwhelming favorite.

Like we said the American League odds list, there is never a real need to play a whole season to win this award.  That is unless you have to compete against a 2015’s winner in Kris Bryant, who was brought up in mid April last year.

Really this is Seager’s spot to lose.

I hate the odds for a guy who is injured to begin the campaign, nonetheless he would still be my pick for the Award.

Steven Matz has dubbed the 2nd favorite – along with Kenta Maeda.  Both of these guys broke camp with the big club, and could make 26 – 30 starts this year.

I love the odd better for Maeda, who is slotted higher in the rotation than Matz.  These odds are not glamorous to wager on either.

Perhaps the most intriguing guy on the list is Trevor Story.  He is the starting shortstop while Jose Reyes is still on the inactive list – awaiting a resolution (suspension) for his part in a domestic dispute in Hawaii over the winter. 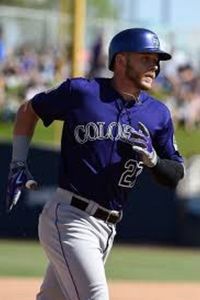 Now, Reyes was lucky to have the charges dropped in the matter, but just like the Aroldis Chapman, the MLB does not need that dismissal to warrant a penalty.  I think a 50 Game ban would be par for the course here.  If this is the case, then Story would be full value for this pick.

With Reyes and his injury history, or even the mere fact that the former Mets, Marlins and Blue Jays player could play for a short while before drawing interest for a trade, Story may play a full load of games this season.

Several pitchers are not even in the MLB right now – awaiting service time issues. or inning limit reductions by starting in the Minor Leagues.

Lucas Giolito is the highest rated prospect for chuckers in 2016.  He and Tyler Glasnow are both decent odd picks, but you will not see them until June.

Trea Turner and Jose Peraza may have made their respective Opening Day Rosters, however these 2 guys also didn’t crack the 25 man Rosters for their teams, and will begin their years in the Minors.

Josh Bell of the Pirates may not get the call up at all should Jung-ho Kang come back successfully, with the rest of the Infield playing up to snuff.

Hector Olivera and Domingo Santana are outfielders that are both starting the year for their teams.  These players are just not as highly rated of prospects as the other guys

The last remaining guy we have not discusses is J.P. Crawford for the Phillies.  Again barring massive amounts of healthy issues for the “Phightins” – you will not see Crawford at all until June, if at all this season.

My bet idea would be to plunk $50 on both Matz and Maeda to win.  Double up on guys that are likely to stay in the rotation all year, are not hurt (like Seager), and have no replacements that could usurp them of their role later this season (like Story).

Your return on investment will be nearly 250% profit on that bet at least.

TO WIN 2016 NATIONAL LEAGUE ROOKIE OF THE YEAR

Tyler Glasnow may be one of the biggest 2nd half additions to the roster as a Rookie on a competitive club, The Bucs could also choose to select Jameson Taillon up to the Majors as well. Either of these guys may see rotation or Bullpen work down the last half of the year and potentially into the playoffs.