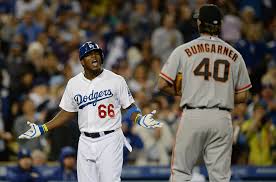 Dodgers versus Giants. Long-standing, time-honored rivalry of blood. Which team holds the edge on the field in 2016? Who is the better player at each position? Time is running short before the season kicks off, so let’s break it down.

MadBum or Kershaw? Of course, Madison Bumgarner has three World Series rings and that is impressive. However, despite those three rings, MadBum has zero Cy Young awards to Clayton Kershaw’s three. More importantly, last year Kershaw’s numbers were better, proving the theory that his arm is far fresher; MadBum has pitched 352 more innings over their respective careers, and history has shown time and again that there is a finite number of pitches in a major league arm.

Numbers 2 – 5 are actually close for the two teams. Johnny Cueto and Scott Kasmir have had their ups and downs; if Cueto is back to the dominating pitcher of old (not his 2015 second-half self), he tops Kasmir. Dodger Japanese import Kenta Maeda looks to be making an excellent transition and figures to be better than Jeff Samardzija, who is coming off a terrible season (why did the Giants pay this guy so much money?). Jake Peavy and Alex Wood seem to cancel each other out with the 34-year-old Peavy on his way out and primed to get hurt again, and the young Wood still trying to find himself…

READ THE REST OF THE ARTICLE HERE