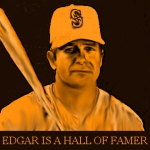 The Baseball Writers Association of America (BBWAA) announced the Hall of Fame class of 2016 tomorrow afternoon. I will be teaching when the inductees are formally announced. I may or may not post tomorrow depending on how interesting the results are.

Honestly, I probably will post something tomorrow. The early indications suggest a very interesting vote.

Let’s start close to home with the story that I, personally, thought would not be a story.

Ken Griffey Jr. is going to make it into the Hall of Fame. That has been unofficially known for years, and will be made official tomorrow. However, as of this evening, Griffey is listed on all the publicly disclosed ballots. Nobody has ever been a unanimous hall-of-famer and Tom Seaver’s record percentage might be in reach.

It seems like once every few decades, we see an influx of young talent and without a doubt we’re in one of those runs right now.

Think of the young players who have made major impact the last couple of years and try to remember back when the Majors was flush with this level of talent of players under the age of 25.  By the way, it’s not over yet either, as we still have to see extended seasons from Byron Buxton Kyle Seager, Joey Gallow, Steven Matz, and the list goes on.  Also, keep an eye on the Shortstop position the next few years, as we will be living in possibly one of the best eras of the Shortstop.

Below is each teams list of players were 24 or younger at the start of the 2016 season.

Below the results listed so far, Pick 10 players who you believe should be in the Baseball Hall Of Fame this year.  We will post the results after the class of this year is posted.  We can see the amount of people who voted.

So we will accurately adjust this mark once the poll ends.  A basic reference to see if a player is being voted for is to take their votes (times by 10) and then divide by the total amount of votes.

Here are the 32 names on the list for consideration.

So Far (at 8:30 AM EST, Tuesday Jan.5, 2015) there have been 260 People who have voted, and only 2 people have left Ken Griffey JR. off of their list.  Piazza and Raines would both join Junior on the Baseball Hall Of Fame Induction list should this come to fruition.

I think the BBWAA should really take stock on the Clemens and Bonds numbers as they are far superior to what they voted for last year.  Both of them are about 25% higher and on the fringe of making the Hall..

I also think that Hoffman is hurt by his 1st year on the ballot.  A lot of people may have factored this in.

Out of 260 People Voting, The Results Thus Far (75% would get a Hall Of Fame Induction)

When Can The Baseball Writers For The Hall Of Fame Consider Cheating Through PED Use, Or Not?

Barry Bonds once admitted to a Federal Jury that he used PED’s. As MLB’s ALL-Time HR King with 762 Round-Trippers, will the BBWAA ever consider looking past this and elect him into Cooperstown? —Photo by sportsagent.com.

When the 2014 MLB Hall of Fame Ballot is released in November, the heated discussion will begin about which controversial candidates, if any at all, would be inducted into Cooperstown (HOF).

While isolated athletes have come up in previous years, this year represents a first real tension between the modern era of baseball – the “steroid era” – and traditional standards for admission into the Hall.

The 575 baseball writers are, and should be, entrusted to weigh cheating and use of PEDs against the HOF’s criteria of “character,” “sportsmanship” and “upholding the integrity of the game” (the integrity standards).