The Rangers rose from the AL West ashes in 2015 and won their first Division Title in 4 years. It came off the heels of 2 injury riddled seasons that plagued any chance to make the playoffs. The club has about $140 MIL worth of salaries to pay in 2016 but should consider spending out another $10 – $15 MIL. They have a need for a Starting Pitcher and could use a breakout campaign from either Joey Gallo or Jurickson Profar to add depth for mid year trade to acquire a proven playoff Starter. The club will also hope Yu Darvish can come back at full strength from Tommy John Surgery. While they have 5 of the top 46 contracts of ALL – Time on their salary, 3 of them came via trade where the former team is picking up some of the dough.

Yes 3 of them came over via trade after chunks were already off, and their former team is still subsidizing some of the money going forward as well, but the Rangers are still already at over $120 MIL already committed in total team salary for 2016.

We have also heard grumblings that the team will look to extend Adrian Beltre this week in order to have him finish out his potential Hall Of Fame Career in Texas.  This won’t hurt the bottom line in 2016 – but will also put some dough on the future of the teams finances should it occur. 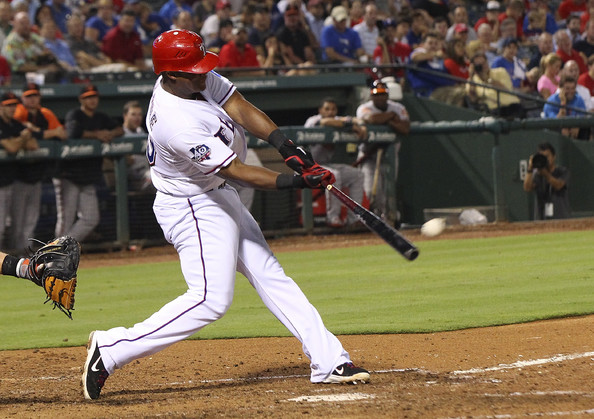 Adrian Beltre has earned every cent of his 6 years/$96 MIL deal signed before the 2011 season so far. He has 3 slashed .309/.358/.514 in his tenure and has finished in the top 15 for MVP voting in each of those campaigns. The Rangers should try to extend him for 2 or 3 more years past 2016 – and lock up the future Hall Of Famer so he can end his career in Arlington. Beltre will play next season at Age 37 – and will make $16 MIL in the final year of his pact.

Prince Fielder will have $30 MIL of his next $120 MIL paid by Detroit over the last 5 years of the deal (2016 – 2020).  Hamilton will only cost the Rangers $2 MIL per year in the next 2 seasons with the Angels eating over 90% of his contract to get rid of the former MVP last campaign.

Cole Hamels will only cost the Texas squad $14 MIL in 2016 as Philadelphia picked up $9.5 MIL of his total contract to play in Arlington after the Trade Deadline deal in 2015.  The Rangers carry the LHP the rest of the way.

Texas will need Yu Darvish to come back relatively healthy in 2016 – for him maintain being a bargain at his $23.6 MIL left or the next 2 years aggregate.

The Rangers will likely be north of $140 MIL after all of the Arbitration players are taken care of.  They should have the wherewithal to add around $10 – $15 MIL in payroll in addition to that.

Doing the Hamels deal was actually quite smart when you think about it.  He is owed only $84 MIL by Texas for the next 4 seasons if they pick up his Club Option in 2019.  Not bad for a solid #1 pitcher with a load of playoff experience.

The team will still be hard pressed to sign any premiere players long-term with the kind of dough they have committed to Fielder, Andrus and Choo beyond that.  Another reason why inking Beltre to a 2 – 3 year extension makes total sense.

Really only Mitch Moreland and Beltre are core guys that will leave this team after the 2016 season.  I believe the club may be wise to sign Moreland past 2016 as well.

For the sake of the team needs, the offense should have enough bang in 2016 to contend for the AL West again.  I believe the key will be the return of Yu Darvish.

Team officials are not looking to spend much more money in terms of any players, however they may be able to use a #5 or #6 Starter that would price out around $5 – $6 MIL.

Joey Gallo remains an interesting case too – as he has loads of talent, and should be able to find his way to the everyday lineup by next summer.  He may even start the year in a platoon with Josh Hamilton in LF.

With Hamilton spending so much time on the DL of late, it may be a quick transition into an everyday player for Gallo.  His entry-level contract status is a vital element in keeping team salary down.

Of course Jurickson Profar is still just heading into his Age 23 season despite missing the last 2 campaigns due to shoulder injuries.  If he can find his feet, he may see some time as a super utility player in 2016. It wasn’t long ago that he was a top rated prospect in the MLB.

Robinson Chirinos C (32):  Baseball Reference says he will make about $2.4 MIL in 2016 – and has 2 more years left of Arbitration before heading to the market prior to the 2019 season.

Shawn Tolleson RP (28):  The Reliever should make around $2.6 MIL and has 2 more years left of Arbitration before heading to the market prior to the 2019 season. 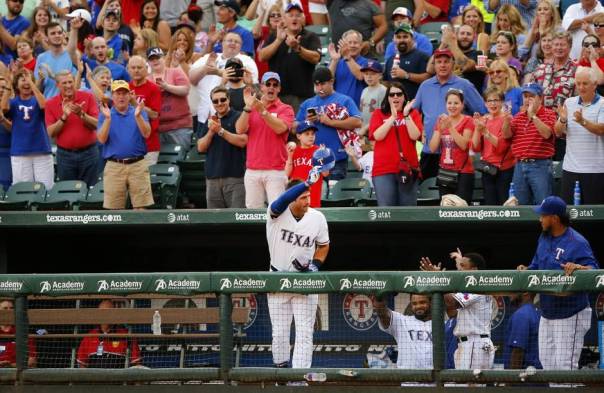 Joey Gallo filled in at 3rd this year for Adrian Beltre and clubbed 7 HRs in 108 AB. He posted just over a .700 OPS. His contract being an entry level deal for a few more years will help the club keep salaries down – and he may blossom into a superstar. He is part of a young crop of players like Odor, Profar and Alberto that are all under 25 for Texas.

Please e-mail me  at: mlbreports@gmail.com with any questions and feedback.   To subscribe to our website and have the Daily Reports sent directly to your inbox, click here and follow the link at the top of our homepage.

I played competitive baseball until 18 years old and had offers to play NCAA Division 1 University Baseball at Liberty University. Post-concussion symptoms from previous football and baseball head injuries forced me to retire by age 19. After two nearly made World Record Attempts in 2008, I set a New World Record by visiting all 30 MLB Parks (from 1st to last pitch) in only 24 Calendar Days in the summer 0f 2009. In April of 2012, I established yet another new GWR by visiting all 30 Parks in only 23 Calendar Days! You can see the full schedule at the page of the www.mlbreports.com/gwr-tracker . In 2015, I watched 224 MLB Games, spanning all 30 MLB Parks in 183 Days. Read about that World Record Journey at http://mlbreports.com/183in2015/229sked2015/
View all posts by chuckbooth3023 »